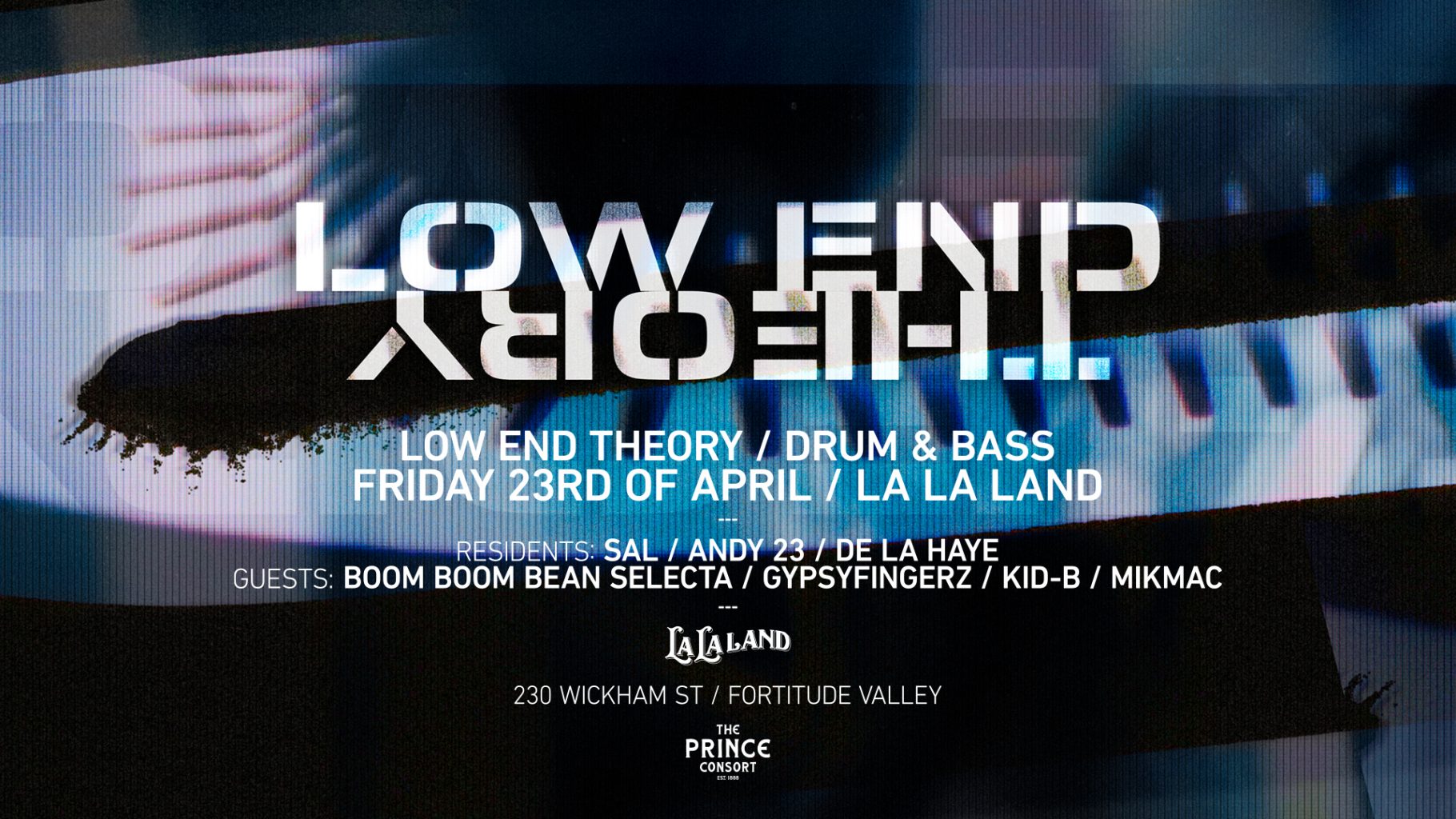 Hello Brisbane massive, we can dance again so Low-End Theory is back
as promised. Now at Brisbane’s newest dance music hub La La land, with
a sound system that your ears and bones deserve. With Resident DJs
Sal, Andy 23 and De La Haye alongside top guest Dj’s, Boom Boom Bean
Selecta, Gypsy Fingerz, Kid-B, and Mikmac each bringing their own
expert style and selection, on a volume that drum and bass music was
intended to be heard at.

Sal known for his heavy-duty skills and selections on the decks has
been busy in the lab formulating his own signature sound. With
collaborations in the bag with prodigious producer Need For Mirrors
and releases on Soul in Motion, 31 Records, and Commercial Suicide he
is looking to continue pushing things to the next level. With a
history on the decks dating back to the late nineties with Wellington
NZ’s legendary Bass Frontiers crew, he had the opportunity to play
alongside and be influenced by true icons of drum and bass such as
Goldie, Grooverider, Doc Scott, Dillinja, Bad Company, Marcus Intalex
and Klute during the true golden era of the sound. Look for him as he
continues to develop his sound in 2021 and beyond.

Artist Two free is Andy 23, he’s been mixing since 1990 when he inherited a pair of disco decks without even pitch. Since then he went on to play at many local nightclubs and raves in the UK including running a pirate radio. He played at festivals including Notting hill carnival and Glastonbury. Even doing a summer in Ibiza. He plays all styles of broken beats from hip hop, dubstep and garage through to breaks and drum & bass. Favoring the lighter more tuneful side he started really breaking through playing intelligent atmospheric dnb in the mid-nineties. Recently he started an online radio called No-Club during Covid and attained over 3000 listeners over the Easter break. He’s been busy in the studio too and his first digital lofi hip hop release “music instrumental LP” is coming to Spotify in December 2020